Children were born to be happy

Yoga off the mat in Cuba

A story of chance, love and rebirth. Lessons from Cuba. 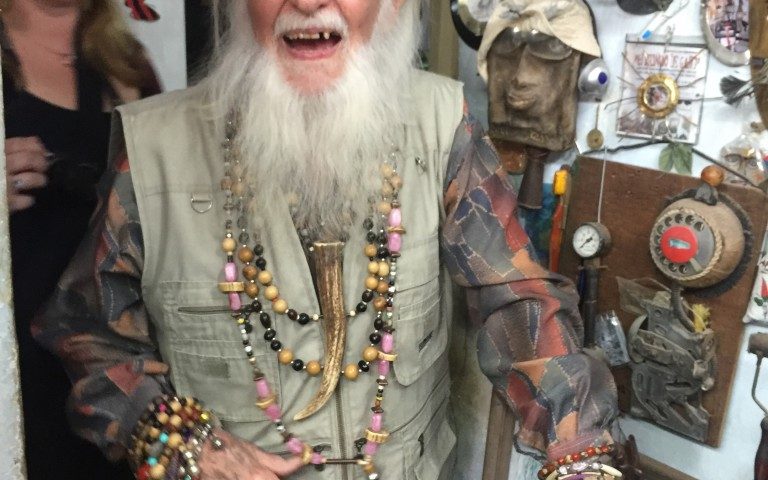 By Dr. Deb Kern. This was first published in the newsletter of Dr. Deb Kern, who partnered with Cuba Wellness Adventures and One Yoga Retreats to create a beautiful adventure in Feb. 2016. To read more of her wise words please go to her website. www.drdebkern.com

Meet Gallo. A fully-alive, joy-filled, open-hearted, 92 year-old poet-shaman-artist. He greeted our group of yogi adventurers in Cuba with open arms and belly laughs as he said, “Welcome!!! I am the artist and the art” 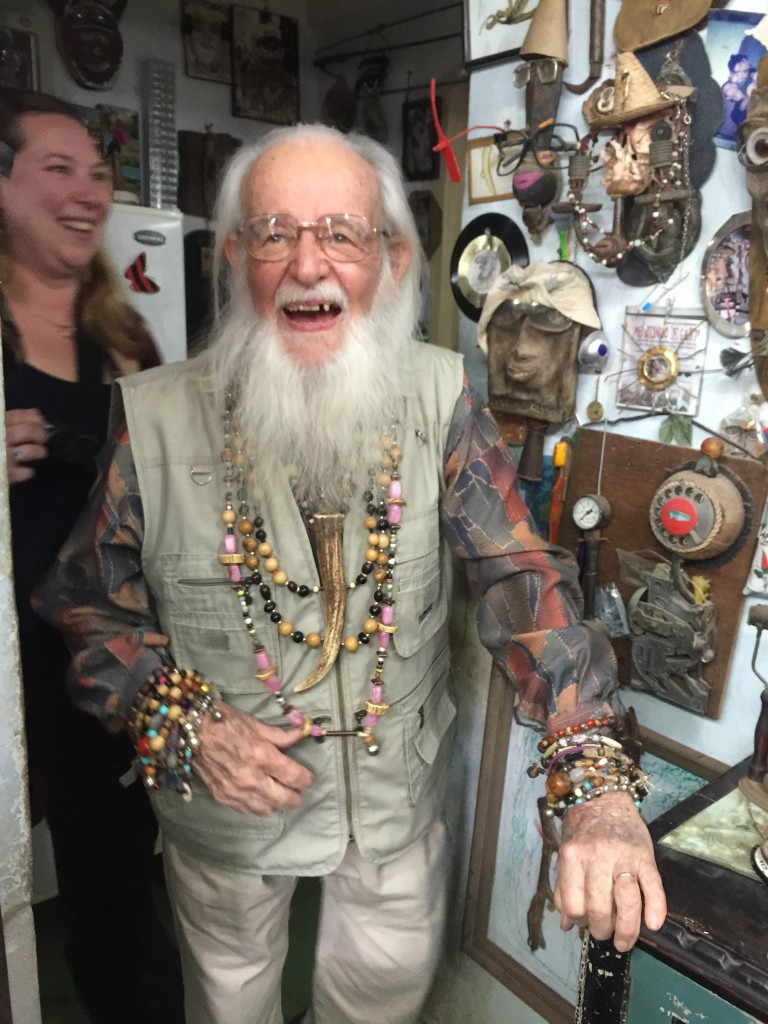 The day our bus pulled up into his washed-out apartment complex. I could never have imagined the wild explosion of art we were about to encounter. Gallo has turned the equivalent of an entire block into an outdoor “found art” museum. 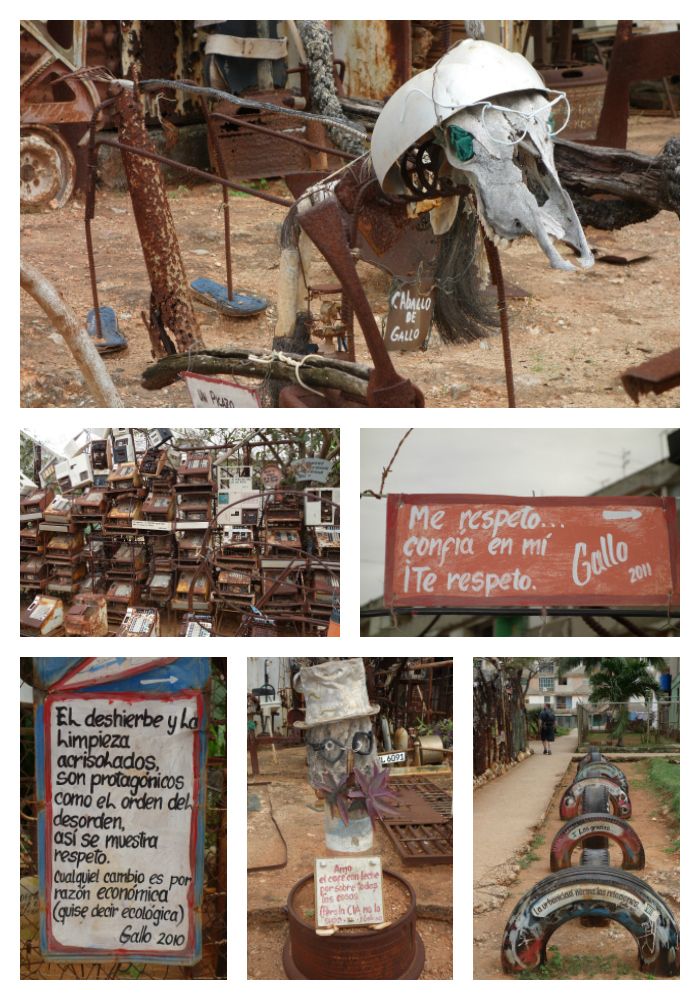 Once inside his tiny apartment – which he shares with the love of his life, Maria Emilia (pictured seated with a neighbor who helps take care of her), we discovered that every square inch was covered with his art. Most of the art features the artist himself and his beloved wife.

Gallo lovingly signed copies of the book of his work that was published by a non-profit organization.  He inscribed poetic words and gave a blessing to each and every one of us. 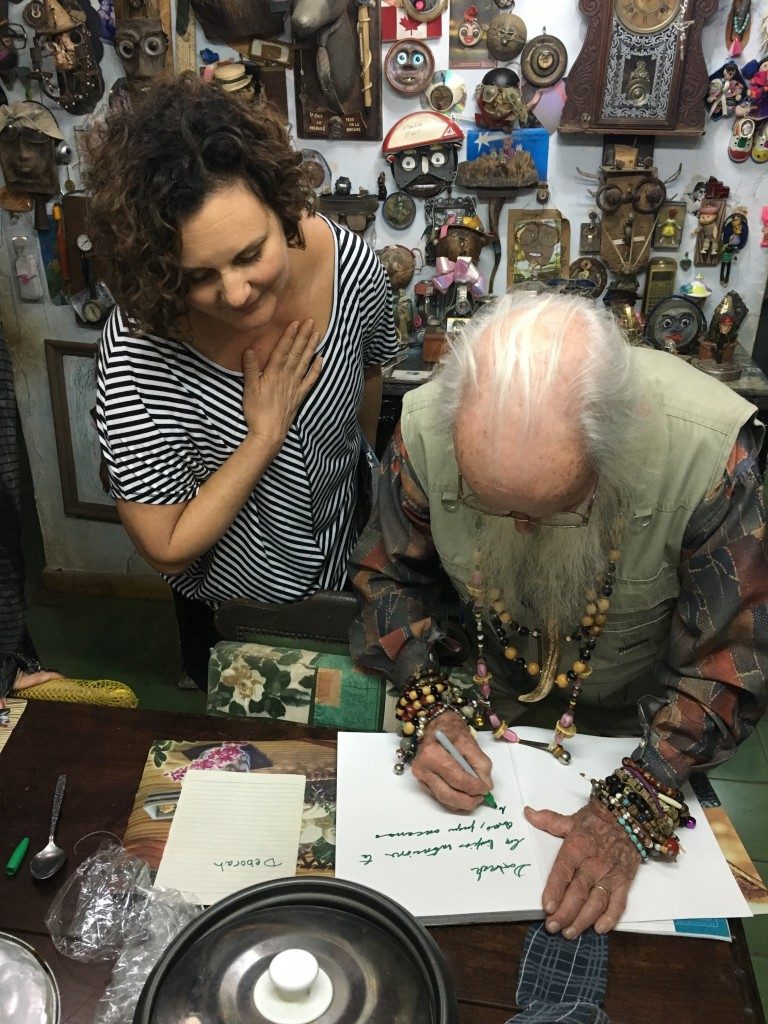 As he signed books he told us the story of his life.  It inspired me so much that I wanted to share it with you.

Gallo says his life began with a miracle because his mother was 47 years old when he was born in 1924.   From his stories, she was clearly a strong-minded woman – and he says he learned many of the aphorisms that appear in his art from his mom.

His dad was the mayor and judge of his village.   The family had a wonderful life until political changes swept his dad from office and left them penniless.  Gallo was only 12, and had no other choice but to work.  He learned to be a barber and says there was never a dull moment. The barber shop served as a meeting place for the area’s socialist agitators.  He soaked up their discussions while cutting their hair and – thanks to his bicycle – served as a liaison between comrades.  On one such journey, he met the love of his life with whom he is still obviously smitten.

When the rebels declared victory in 1959 he received a directive from a government official: “From now on, you are no longer a barber, but a diplomat.”

And so, in his words, “this semi-literate began a round-the-world trip that took us (he and his family) to twenty countries.”    In the early 1980’s, while still ambassador to Cambodia, he finished journalism school – graduating at the age of 58!

But his life crumbled in 1990 when he was forced into retirement.  He told us that he was despondent.  He had spent 30 years rubbing elbows with ambassadors and ministers and now he was destitute (the pension wasn’t enough to put food on the table.)  He saw the socialist world he had believed in so deeply collapsing like a house of cards all around him.

He told us he became severely depressed.  In his depression he began to obsessively clean and tidy up his apartment, the vacant lot adjoining the apartment building, the sidewalks, and the public spaces of what he calls “The garbage dump of a neighborhood.”

As he picked up abandoned junk he decided to give it a second life.  He wanted to create beauty and rebirth.  So he began to “plant” art in his yard…then in the vacant lot.  He said “A loving thought alone produces more beauty than the most expensive day creams.”  (TWEET IT)


At this point in his story he looked at our group, his eyes wide like a child in wonder and said “Life begins at 71!!”

And he left us with this:

“If today I could bless the reasons that made me come here, I would.  Because, I swear, I feel like I’m in a place where I’ve put my roots down.  I’m a sapling.  Look, I’m 92!  All I did was cling to art with the energy of despair…and I’ve become a new being.  An infinite being.”

In the inevitable times of loss and disillusionment, may we all experience such love and rebirth in our lives.

Children were born to be happy